It’s not everyday you get to walk around a real-life archaeological site. A place that has relinquished so many secrets yet acres of it still remain a mystery.

Pompeii, a city lost in time for over 15 centuries, gives us a fascinating glimpse into life as it was back then. On a visit full of surprises, I could not help but be enthralled like the millions who visit each year.

The day a city was lost

On that fateful day the people of Pompeii had no idea that Vesuvius was even a volcano, after all it hadn’t been active in nearly 2000 years.

The eruption would go on for over 24 hours spewing 1.5 million tons of lava a second, covering Pompeii and its surrounds. Ash rained down blanketing the city in layers over 10 feet deep.

Thousands were trapped and died, choking on the fumes and ash.

The eruption and its deposits of ash and pumice would change the geography of the region and Pompeii would remain hidden for centuries. 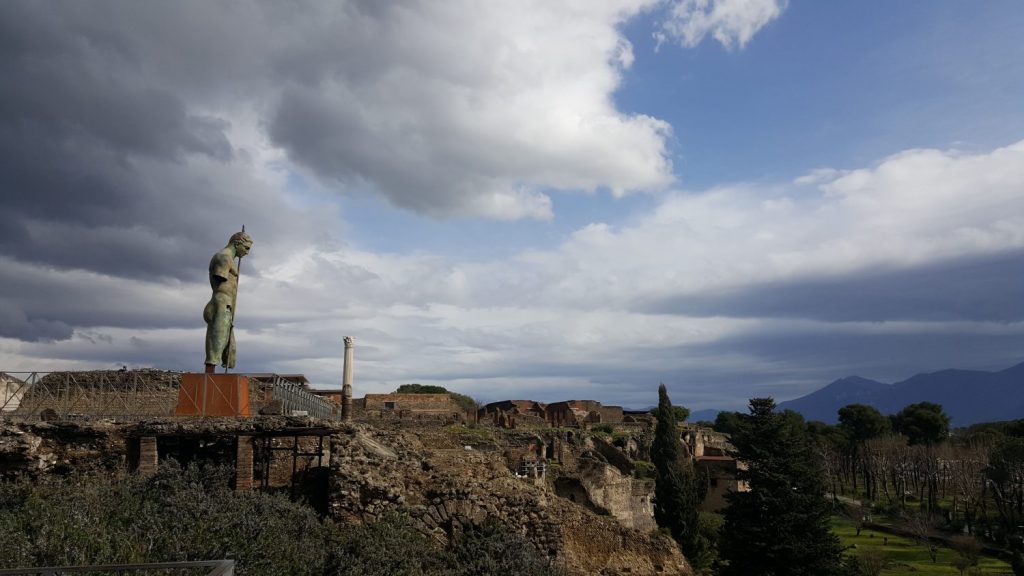 It was not until the construction of the palace of King Charles III almost 1700 years later that Pompeii would be uncovered. Under feet of debris workers found what proved to be a city nearly intact. Insulated by layers of ash coupled with the absence of air and moisture the city had remained remarkably preserved.

Pompeii was a city frozen in time.

Walking through what was once a thriving hub of trade and commerce, I was left with a sense that the people who lived then were not so different from us today.

Shops boasting the accoutrements of any modern town (I saw the ancient version of a fast food restaurant).

Public baths with under floor heating and pipe-borne running water.

Frescoes as vibrant as the day they were painted called to me as I  moved from house to house.

And what can I say about the brothel with its directional signage in the streets. Inside were helpful ‘menus’ confirming the existence of a profession maybe as old as time itself?

Pompeii spoke of a place where art, culture, business, family, relationship… living, carried on as it does today.

And yet as I drifted along the wonder was tinged with sadness too because it also painted a portrait of death. Thousands lost their lives that day completely unaware that their time had come.

A fatal strike right out of the blue.

As I looked at the plaster casts of some whose last moments in life were frozen for all posterity, I could not help but recall this message from the Stoics.

Memento Mori – Remember you will die!

Because like those who died that day we don’t know when our time will come yet we know it is something we cannot escape.

Memento mori reminds us to ready ourselves for it by delaying nothing.

Memento mori reminds us to not be wasteful of the time we do have.

Memento mori teaches us that by remembering death we remember the importance of truly living… here and now.

Do you want to make a change in your life?

Are you hesitating, filled with fear? Maybe you’re waiting for the right time or think it’s just too late for you.