Spain has often been described as a collection of regions rather than a country. Each has its own unique customs, character and even language. One area with a very distinct identity is the Basque Country. Considered a separate nation by the over 2 million people who live there, it is an area that covers parts of both Spain and France. The Basques call it Euskal Herria (land of the Basque language) and that language, Euskera, along with their traditions, is at the core of how the region defines itself.

Bilbao is the capital of the province of Vizcaya in the Basque Country and although not as glamorous as Madrid or Barcelona is one of the region’s most popular destinations. Formerly an industrial city, it is now modern, vibrant and full of art and culture. So when the email alert for a cheap flight popped into my inbox I jumped on it. A few weeks later I was in Spain and boarding a bus in Santander destined for Bilbao. With perfect weather, no itinerary and 48 hours to kill, here are just a few reasons why Bilbao should be on your list of cities to visit.

What can I say? Perched on the bank of the River Nervión, this stunning titanium building was designed by Canadian architect Frank Gehry and opened in 1977. It is now an iconic figure of modern architecture and a symbol of the regeneration that lifted Bilbao out of its post-industrial depression. I remember seeing pictures of the Guggenheim in travel magazines beforehand and wondered if it would be as amazing in person. Without a doubt, Yes! From any angle this building truly impresses.

Other artists have gone on to create accents for the Guggenheim. Right outside is Louis Bourgeois’s Maman a canopy bearing a great resemblance to a huge skeletal spider while on the city side I got an up-close view of Jeff Koon’s 12m high highland terrier puppy made up of thousands of begonias – a kid’s favourite.

No visit to any city is complete for me without a browse round its museums and the Museo de Bellas Artes did not disappoint. It houses a fascinating collection that includes everything from Basque art and classical paintings to gothic sculptures.

This painting by Adolfo Guiard was one of my favourites.
Add to that the many temporary exhibitions that pass through the museum and it would be easy to keep going back again and again. During my visit there was a 1950s French haute couture exhibit which showcased the evolution of female fashion from 1947 to 1957. On display were wonderful originals from that period by Christian Dior and Yves Saint Laurent.

Atmospheric is probably the best way to describe Bilbao’s old quarter. Full of charming, narrow, windy streets, boisterous bars and plenty of quirky and independent shops. It is also home to St. James Cathedral and markets Plaza Nueva and Plaza del Arenal. At it’s heart are Bilbao’s original seven streets, Las Siete Calles which date back to the 1400s. Now it’s abound with cafes, pintxo bars and boutiques where one can find both high-end designer goods side by side with cheaper fare. There was just a constant buzz of activity as I meandered through and believe me it was a challenge keeping my money in my wallet. The old town was one of my favourites on this trip.

So what do you do when surrounded by countless restaurants and drowning in a sea of mouthwatering aromas? You eat … a lot. I lived on pintxos during my two days in Bilbao. The Basque Country version of the Spanish tapa, I loved the seemingly endless combinations on offer. Bacalao and manchego cheese, spinach and chorizo served on small chunky slices of bread, croquettes with squid, my stomach was content. Wash that down with txakoli, a local white wine – I just love the simple pleasures.
Along the River Nervion

The most striking of the modern bridges that span the River Nervión, the Zubizuri (Basque for ‘White Bridge’) has become an iconic feature of Bilbao’s skyline since its completion in 1997. Designed by Spanish architect Santiago Calatrava, it has a curved walkway suspended under a lovely white arch, the two connected by what looks like steel wires. The bridge apparently generated much controversy in its early days because of the many slips and falls pedestrians suffered while walking over. Today the glass floor is covered by a non-slip mat.

No visit to Spain is complete without a big party and Bilbao is no exception. I arrived just in time for the preparations for the annual Aste Nagusia festival, in fact some of the participating bands were staying at my hotel (giant drums and all). Aste Nagusia is the biggest festival in northern Spain. Dedicated to the Virgin of Begoña, it is where Basque culture is celebrated at its fullest. There is traditional Basque music and dancing, as well as sports such as wood chopping and stone carrying competitions. At it’s peak you will find flocks of over 100,000 revelers on the streets partying all night long to live music and a backdrop of fireworks. I left just before the party got into full swing with a promise to return one year soon.

I’ve found that very often the best parts of a holiday are the unexpected bits. Walking my way around the city I inevitably got lost a few times but usually uncovered some lovely gem or a picturesque spot away from the hustle and bustle. I could probably go on for pages and pages but I wont. Here are a few things that surprised me.

Now I know I’m in Spain but I did expect to hear more English. It was the middle of August and I mingled with lots of Spanish and French speaking holidaymakers but apart from the staff in my hotel, I didn’t hear a word of English. It’s not a criticism as I got the chance to practise my French and Spanish but it was a surprise.

Another surprise was how startlingly different the Basque language was from Spanish. Euskara is apparently unrelated to any other language spoken in Europe, or indeed the world and it is a unique experience listening to it in person. I did make an attempt at pronouncing some of the words with their many Ks, Xs and Zs. I now know that Getxo (a coastal town just outside Bilbao) is pronounced Gecho.
Despite the language barrier it was no problem making myself understood – I’ve perfected the art of gesticulation. 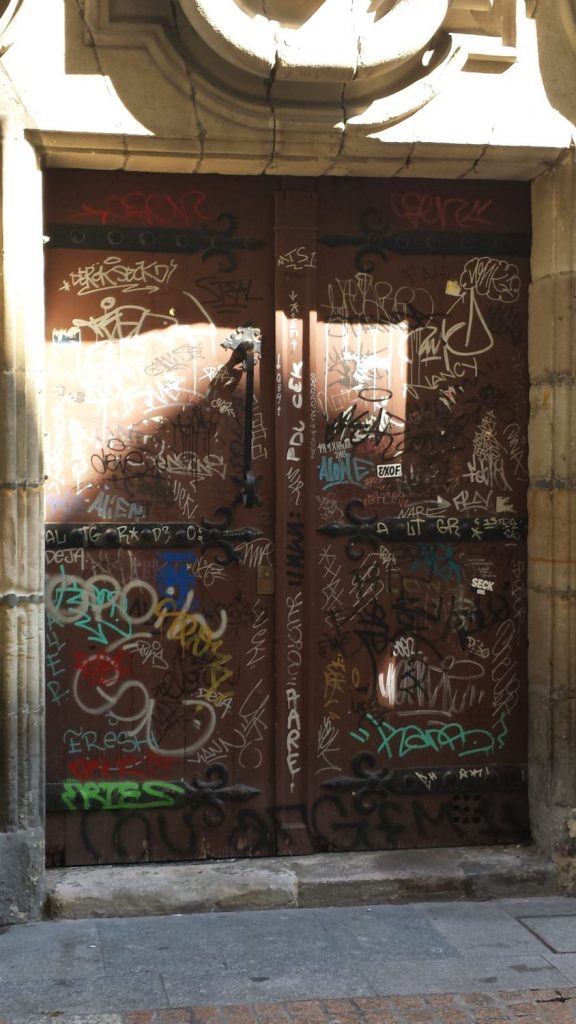 Navigating through the narrow streets of the old town, I came across this door riddled with colourful signatures. I knew it had to be linked to some important event or person and a quick question revealed that it was once the home of Simon Bolivar. Yes, The Great Liberator as a young man lived behind those doors. That was probably the biggest surprise of the day. That discovery piqued my curiousity and with a little digging after my trip I uncovered a great but tragic love story.

A free tour that was priceless.

I have to say that when I on a whim sent an email to the Bilbao Greeters Network a couple of weeks before my trip I didn’t know what to expect. Well let’s be honest, I did not have very high expectations but I had nothing to lose. It was probably one of the most enjoyable experiences I’ve had to date. Essentially, a local person takes you on a tour of the city, showing you their favourite sights and places that you would not necessarily find in a guide book. It’s absolutely free and you can opt to make a small contribution afterward, if you want.

In my case it was Jose, who took me on what ended up being a near 2 hour walking tour of the city. Seeing a place through the eyes of a native was priceless. So if you want to get a closer look into a culture, I highly recommend the Greeters network which is available in many cities all over the world. 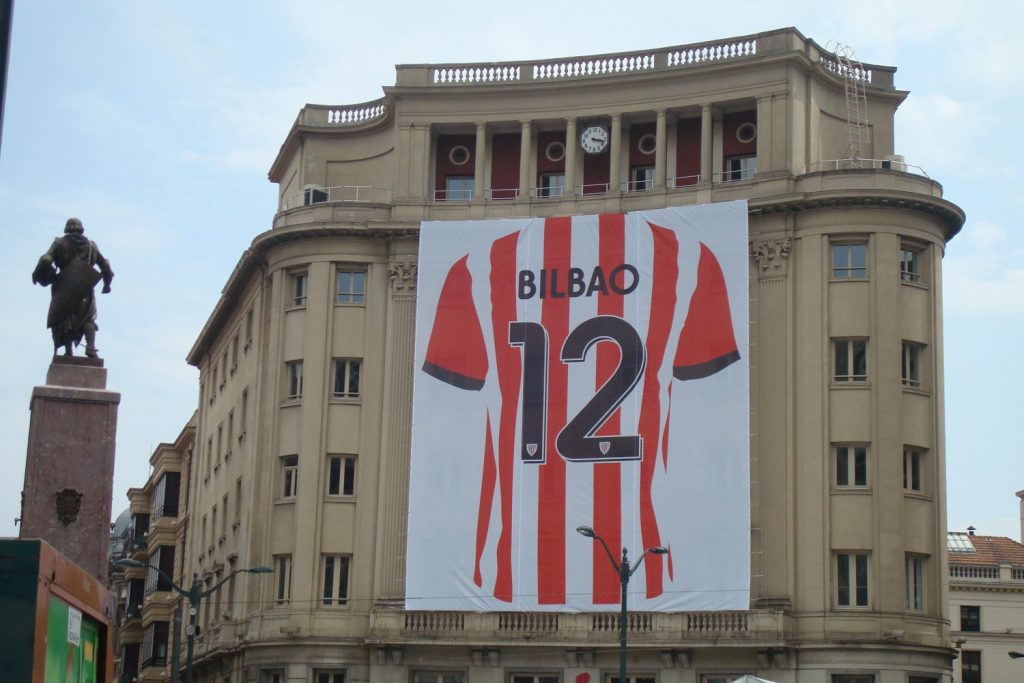 The whole city was riding on waves of excitement and anticipation of the imminent Supercopa de España final against La Liga rivals Barcelona. It was a chance to avenge their defeat at the Copa del Rey earlier that year. Aste Nagusia and a cup final, it was the week to be in Bilbao. (Bilbao did go on to lift the Supercopa). 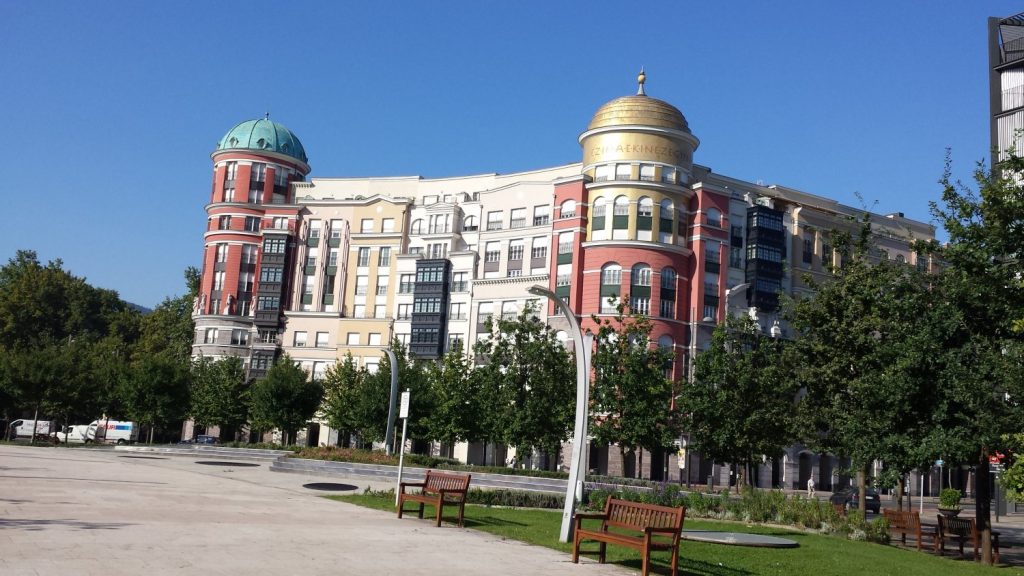 Bilbao is a place where you can get to admire buildings with different architectural styles but I didn’t expect to see them all in one building. During my wanderings I came across this curious apartment building displaying a mish-mash of architectural styles. How many do you recognise? 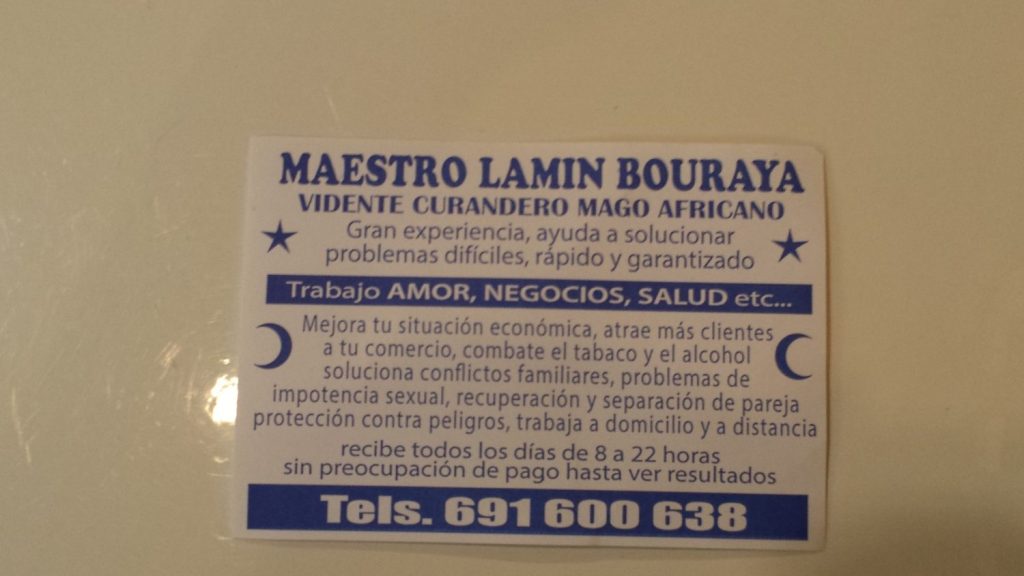 Walking down the Gran Via de Don Diego López de Haro, the main shopping and business area of Bilbao, with many banks and high-end stores, I did not expect to be handed this flyer. I’m not sure if I looked like I was in need of it but Maestro Bouraya’s agents promised to bring me my heart’s desire. Looking for love? No problem. For just a few euros I could get any man I wanted … guaranteed.

And that rounds off my brief time in the Basque Country. Bilbao did not disappoint: from the incomparable Guggenheim to the obeah man selling his wares, my 48 hours there proved to be eventful and memorable but most of all so much fun. I came away with the feeling that here was a city of real character. Lively and spirited, full of culture but unpretentious, just really down to earth.