The air got chillier as we travelled up the mountain and I was thankful that I’d remembered to pull on a jumper before setting out. As we rounded a bend, I got my first glimpse in the distance, a giant rock jutted skyward with what looked like a tiny terracotta-roofed dollhouse perched on top. Yes! We’d finally arrived in Meteora, one of the most mystical places in all of Greece. 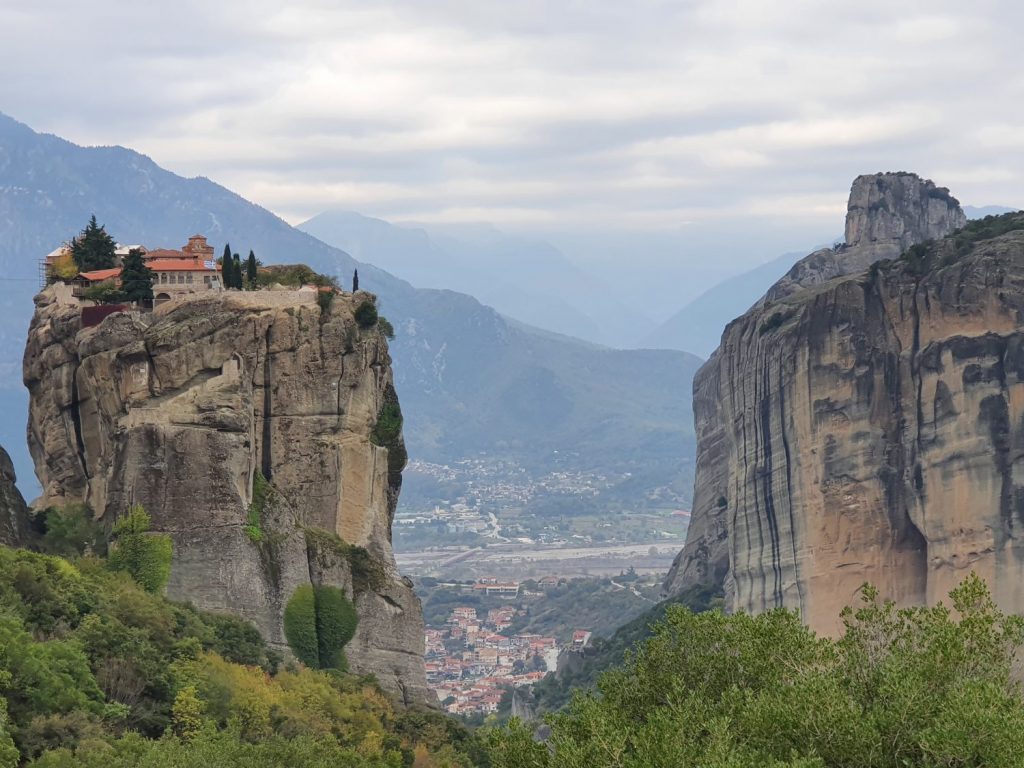 Meteora takes its name from the ancient Greek word metéōros which means ‘hanging’ and the reason is obvious, the monasteries dotted across the tops of these giant pillars seem to be suspended in mid-air. But just as fascinating as the monasteries are the giant rock formations that support them. How did they come to be? For that answer we have to go way way back in Greek Mythology to Uranus, Gaea and their children, the first Titans.

The Hecatoncheires were giant creatures in Greek mythology. With one hundred hands and fifty heads they were immensely strong and powerful. Fearing that they would threaten his position, Uranus, their father, imprisoned them in Tartarus, the deepest region of the underworld. Their mother Gaea, however, loved them as much as she loved her other children (the 12 titans) and could not forgive Uranus for his cruelty; she began to plot her husband’s demise.

Capitalising on their youngest son Cronus’s resentment towards his father, she made him a weapon to defeat Uranus and condemn him to Tartarus. Cronus was now leader of the first generation of titans. He ruled all gods and men in what was called the Golden Age, the best of the fabled five ages of man where the gods walked among men. But it wouldn’t last. Cronus was haunted by his father’s omen, that he would be overthrown by one of his children just as he had done to Uranus. Paranoid, Cronus began swallowing his offspring as soon as they were born.

A great battle and the rise of the Olympian gods

From ecstatic bride, Rhea grew to hate Cronus. She had already lost five children to their father’s madness and was determined that the fate of her sixth would be different. She turned to Gaea for help who advised her to travel to Crete to have the baby. There she gave birth to Zeus and left him behind to be raised by nymphs. To trick Cronus, she wrapped what would be called the Omphalos stone in swaddling and gave it to him in place of the baby.  Cronus swallowed the stone whole thinking it was Zeus.

Zeus would grow to adulthood and eventually free his brothers and sisters. He would team up with the Cyclopes and Hecatonchires to fight Cronus in a decade-long war called the titanomachy. The stunning terrain of Meteora was essentially a by-product of that war. Zeus used the Hecatonchires to hoist huge rocks and throw them against the titans. The same rocks we see in Meteora today.

The Omphalos would prove to be significant to the Olympian gods. After the titanomachy, it was placed at Delphi marking the centre of the world. 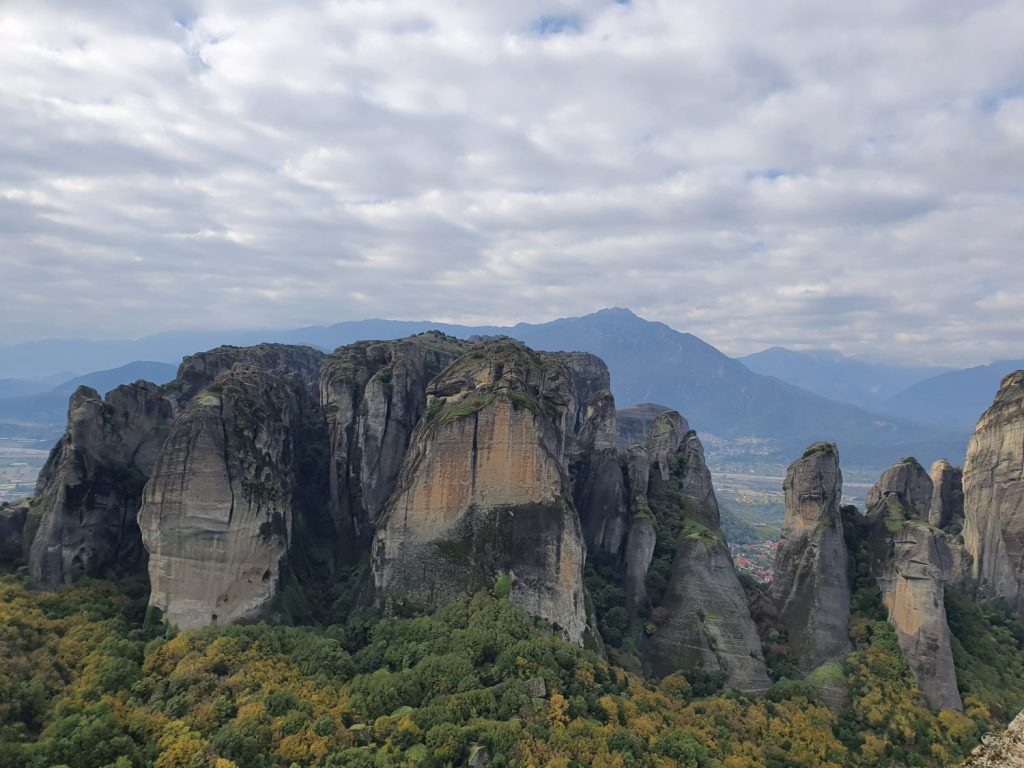 Geologists believe that the rock pillars of Meteora formed about 60 million years ago during the Paleogene period. At that time, the area was covered by sea which explains they are composed of sandstone and conglomerate rock. A series of earth movements pushed the seabed upward creating a high plateau. Over time, the mountains left behind were further forged by strong winds, rain and other weather conditions resulting in the dramatic forms we see today.

The history of the monasteries 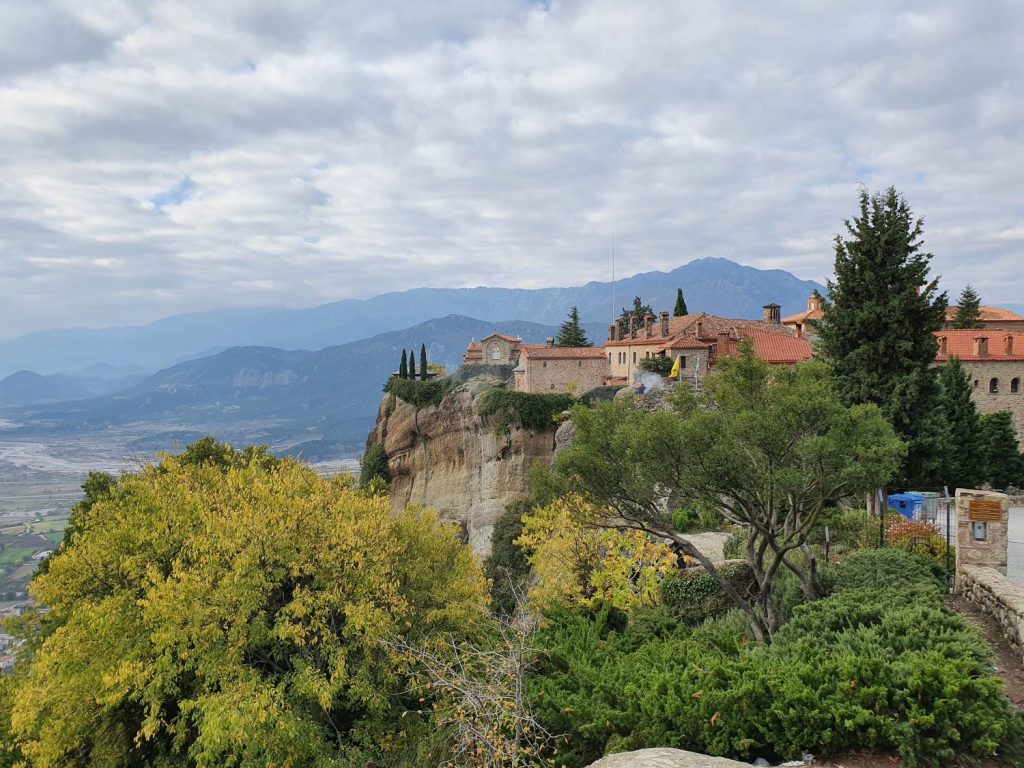 Hermit monks first settled in Meteora as early as the 9th century. They climbed the tall pillars seeking lives of solitude and introspection and, at times, to escape persecution. By building the monasteries on top of the rocks, the monks believed they could get closer to God. The first Eastern Orthodox monasteries were built in the 14th and 15th centuries. Baskets and ropes were used to move up and down the cliff face and retracted to restrict access to outsiders.

At its peak between the 15th and 17th centuries, Meteora was the destination for monks seeking a spartan life in a spiritual environment. 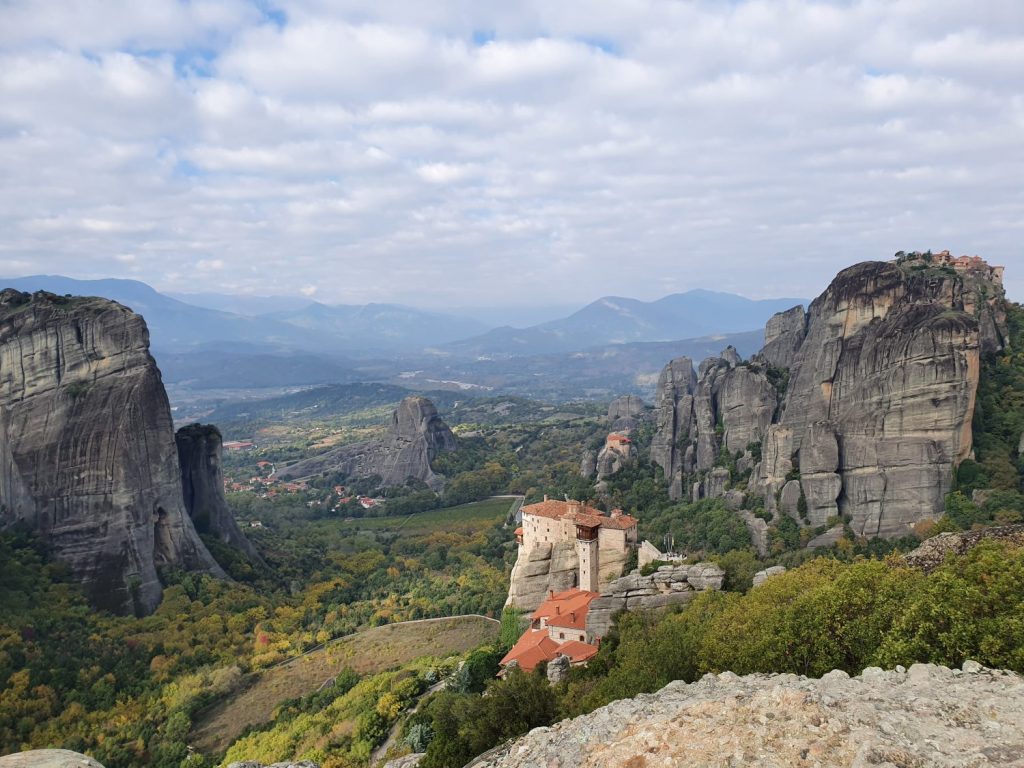 Today, only six of the original twenty-four monasteries remain open with two operating as nunneries. Steps carved into the rock have replaced the old rope ladders. Visitors come from all over the world to enjoy incredible views and see the monasteries up close.

They get to enjoy the unique architecture and artefacts from the Byzantine period. Paintings, precious icons and vivid wall paintings are just some of the items on display. The more adventurous explore the dramatic terrain and even try a bit of rock climbing. The monasteries continue to attract pilgrims to this day.

To experience Meteora especially at night is to feel like you’ve wandered onto another planet. It’s no wonder it continues to attract locals and tourists alike. Whether you’re interested in Greek mythology or geology, curious about the monasteries themselves or fascinated by the remote, austere beauty of Meteora’s rock pillars, it is a must-see on a trip to Greece.